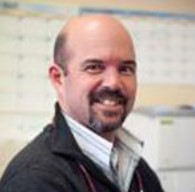 I was born and bred in Waikato and underwent my medical training at the University of Auckland. In the late 1990s, I travelled to Scotland, where I underwent post graduate training in general practice. On my return to NZ in 2004, I undertook further study and completed my Fellowship to the NZ College of General Practice in 2006. I enjoy all aspects of general practice, including family medicine, minor surgery, school clinics, emergency medicine and elderly care.

I am actively involved in teaching and enjoy working with trainee interns, PGY House surgeons and GP registrars. I am active in the oversight of Quality plans for general practices in the central North Island, through involvement with Midlands Health Network. I began work initially as a locum for Health Te Aroha in 2004, becoming a partner in 2005, joining GPs Tertius and Paul.

Outside the medical centre, my interests include fitness (gym work, running, cycling) and music. I am a New Zealand Champion Bagpiper, currently active in competing, performing, judging and teaching all aspects of this instrument. I was Pipe Major of the Hamilton Caledonian Society's pipe band from 2007-2009. I have won numerous prestigious prizes competing in Scotland in international events. I am married to Meleana, a talented piper in her own right. We have two children.

Dr Brendon Eade is available at the following service: