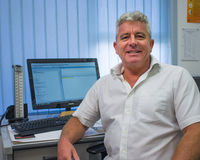 Originally from Leeds in Yorkshire UK, Mick graduated from Manchester Medical School in 1985. After Pre-Registration House Jobs in Medicine and Surgery Mick went into GP training. This commenced with 6 months in Accident and Emergency Medicine and was followed by a year's Paediatrics and 6 months' Obstetrics and Gynaecology. The Paediatric and Obstetric jobs were in Central Manchester Teaching Hospitals and involved him teaching 4th year Medical Students.
Next was a year as a GP Trainee (Registrar) in South Manchester. Mick achieved his GP training Certificate in 1989.
This was followed by a further 6 months of Accident and Emergency Medicine.
Mick then went travelling for a year. USA, Mexico, Australia, NZ, Indonesia, Malaysia and Thailand. This included 4 months GP work in Melbourne. He spent 9 weeks hitch-hiking around New Zealand and fell in love with the place.
Mick returned to Manchester to do 6 months Orthopaedics and Urology. This was followed by GP Locums while he sold his house in Manchester and planned his new life in New Zealand. In November 1992 Mick started work at Tarawera Medical Centre. In 1993 he became a partner.
Mick achieved his FRNZCGP in 1996 and has been a Postgraduate Tutor for the RNZCGP since 2004.
He was on the Board of the Kawerau PHO for the duration of its existence.

Mick has two teenage children and a younger stepson with his wife. Outside family and friends, Mick's loves are football and travel. He has been the doctor to the All Whites on a few occasions.

Dr Michael Lavelle is available at the following service: