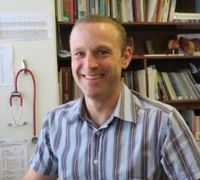 Tim was born in Vancouver, Canada moving to Dunedin as a child.  He completed his education in Dunedin attending Otago Boys’ High School and Otago University, graduating from Otago Medical School in 2000 (same class as Dr. Craig Pelvin).  As a junior doctor he went on to work in Wellington, Gold Coast, Palmerston North and Christchurch before moving to the West Coast. He spent 11 years working in General Practice in Greymouth, completing his general practice training in 2007. Having thoroughly enjoyed growing up in Dunedin, Tim returned here in 2015 to share the same experience with his partner and three primary school aged children.Tim enjoys all aspects of general practice and appreciates the privilege of working with people of all ages and backgrounds. With an interest in Sports Medicine he completed a Diploma in Sport and Exercise Medicine in 2015.

Outside of work he enjoys competitive long distance running and occupies his remaining spare time with a bit of DIY.

Dr Tim Bolter is available at the following service: