Dr Stephen Mills is one of New Zealand's most accomplished and highly regarded plastic surgeons.

Stephen studied medicine and trained as a plastic surgeon in New Zealand, gaining his surgical fellowship (FRACS) in 1996.

He then worked overseas with some of the world’s top plastic surgeons and cosmetic surgeons in Britain and Australia. Returning from overseas in 1999, Stephen became a plastic surgery consultant at Middlemore Hospital where his work has been internationally acknowledged.

2004 also saw him become a member of the Medical Advisory Committee of the NZ Breast Cancer Foundation. From 2012 – 2014, Dr Mills was chairman of this committee as well as a trustee of NZBCF.

Dr Mills has been in private practice since 2003 and in 2016 he decided to work solely in the private sector focusing on:

Dr Mills consults from the three locations shown on the left and operates at Brightside Hospital, Laparoscopy Auckland and Auckland City Surgical.
Michele is our practice nurse manager.
What is Plastic Surgery?
Plastic surgery covers a wide range of different surgical procedures that repair, reconstruct or replace structures in many different parts of the body including the skin, face and head, hands, breast and stomach. Plastic surgery does not involve the use of plastic materials.
Plastic surgery can generally be divided into two main types:

You will have an initial consultation with your plastic surgeon who will assess your general health and discuss the best type of surgical procedure for you. You will be given instructions on medications to avoid before surgery.

All costs and charges will be discussed with you. Finance may be available - please click here to read more

Free patient parking is provided at each clinic. 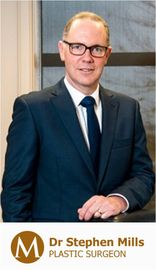 This page was last updated at 11:03AM on August 9, 2021. This information is reviewed and edited by Dr Stephen Mills - Plastic Surgeon.