When a breast has been removed (mastectomy) because of cancer or other disease, it is possible in most cases to reconstruct a breast similar to a natural breast. A breast reconstruction can be performed as part of the breast removal operation or can be performed months or years later.
There are two methods of breast reconstruction: one involves using an implant, either alone or in combination with a flap of tissue taken from another part of your body; the other uses tissue taken from another part of your body such as the abdomen or back without using an implant. There may be medical reasons why one of these methods is more suitable for you. There are usually several options from which you can choose.
Implants
A silicone bag filled with either silicone gel or saline (salt water) is inserted underneath the chest muscle and skin. Before being inserted, the skin will sometimes need to be stretched to the required breast size. This is done by placing an empty bag (called a tissue expander) where the implant will finally go, and gradually filling it with saline over weeks or months. The bag is then replaced by the implant in an operation that will take about 1.5 hours under general anaesthesia. Reconstruction by implant or tissue expander followed by implant is often done on an outpatient day stay basis.
Flap Reconstruction
A skin flap taken from another part of the body such as your back (latissimus dorsi flap), abdomen (rectus abdominus flap) or buttocks (gluteal flap), is used to reconstruct the breast. If taken from the back or abdomen the skin flap is left attached to the muscle through which the blood supply comes. Abdominal and buttock tissue can also be transferred as a 'free flap' (detached from the body) and then reattached by joining up the main artery and veins using an operating microscope. This is a much more complicated operation than having an implant and may last up to 6 hours and require a 5- to 7-day stay in hospital.
The most common type of breast reconstruction is the "TRAM flap" (Transverse Rectus Abdominus Musculo-cutaneous flap). The skin, fat and muscle from the lower abdomen is freed then tunnelled up under the skin to lie where the breast used to be. The 'flap' of tissue is then shaped to look like a breast and sutured into position. A nipple is usually reconstructed 3-6 months later and at the same time the other breast can be reduced or uplifted to match if needed.

For the unfortunate woman who has lost a breast to cancer, having either an immediate or delayed reconstruction can give a huge psychological boost to improve self esteem and quality of life, as well as a big improvement in appearance! 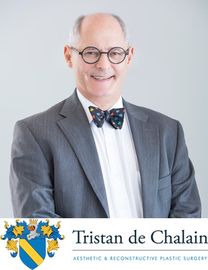