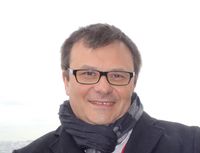 I was graduated in 1987 from Faculté de Médecine Xavier Bichat Paris, France.

I started my Urological training in 1988 in Toulouse and finally completed a fellowship in Bordeaux in 1996.

I worked from 1996 to 2008 as a Urologist Consultant in Dax, small city of South Western France, between Bordeaux and Spain, close to the Basque Country.

My special interests are in urological cancers and holmium laser enucleation of the prostate.

Mr Christophe Chemasle is available at the following service: